Outside La Tuna Icehouse & Grill in Southtown, co-owner Michael Berrier loved the regal display of “cow’s tongue” cactus, grown from a few cuttings taken from the yard of his wife Suzanne’s grandmother 29 years ago.

Thick and sinewy, with narrow pads over 2 feet long, the massive thicket sprawled over the sidewalk at Probandt and East Cevallos streets, admired for its signature plump purple fruit, tunas in Spanish.

“It is, for us, totally iconic,” said Berrier, wistfully. “We lost maybe half of it or more in the big freeze. We hauled it away in a trailer. It’s a very durable plant, but that freeze was tough.”

Across the city, veteran horticulturists, landscapers and amateur gardeners alike seemed to agree — it wasn’t just the extreme cold that got down to 8 or 10 degrees, but its duration.

An estimated 151 continuous hours of freezing temperatures damaged plants and trees in ways that, unlike with hurricanes and tornadoes, might not be fully known for weeks or months to come.

“It was as bad or worse than anything we had back in the 1980s,” Texas A&M AgriLife extension agent David Rodriguez said, referencing a decade many locals use for comparison purposes as the benchmark for bad freezes. “I’ve been telling people to unwrap everything, cry a little, pray a little.”

Rodriguez said the ubiquitous stands of prickly pear throughout San Antonio and South Texas should survive the blast but not without shedding an extensive amount of pads.

The damage is visible everywhere. A walk past the Alta Vista neighborhood’s community garden shows lovely green-and-yellow century plants wilted like spinach. At the Alamo, spokesman Kevin Femmel said he saw plenty of wilted plants but that it was too early to tell if the shrine’s venerable Mexican olive tree was damaged.

Because the storm featured more snow than ice, there weren’t a lot of limbs broken off large trees in the city parks, said Cathy Justice, the city’s forester. Damage to the Mexican olives might not be obvious until the spring, when they begin to put out new leaves.

Many of the elegant palms that mark San Antonio’s older residential areas don’t seem harmed by the brutal cold, Rodriguez said, but their fate won’t be known until their fronds have indicated a recovery. The trunks may appear firm, he said, but the gnarly trees may be rotting from within.

Two factors possibly made the pain of this freeze more widespread, Rodriguez said. The city had experienced unusually warm days in early February, a false spring of sorts that could have lured people and plants into thinking winter was finished.

Because of COVID-19 and more people staying home, interest in gardening “has just skyrocketed,” he said, and some new practitioners might not have been prepared.

But even expertise has its limits. Craig Vestal, owner of Vestal Landscape & Tree Trimming, said he didn’t have much to offer the numerous callers seeking his advice before the freeze on how to wrap plants.

“I just said, ‘Good luck, nothing much is going to help you in something this severe,’” Vestal said.

Calvin Finch, a longtime garden columnist for the San Antonio Express-News and a weekly radio show host on KLUP-AM, said he thought many people were hoping local weather forecasters had exaggerated and were simply wrong about the coming single-digit onslaught.

“A lot of our advice is futile in that kind of cold,” he said. “It’s all people are talking about now, and how we really won’t know all the damage for weeks or months.”

His own quick survey: Native Texas wildflowers such as bluebonnets and Indian paintbrushes should make it through all right, as well as peach trees, he said, choosing his words carefully.

“I’ve got lemons and limes, Methley plums, Florida King and June Gold peaches,” said Finch, with a voice touched by a heavy heart. “I think they may be OK. I used heat lamps, but that’s meant for a few hours of extreme cold, not 151 hours.”

One potential and notable victim — the monarch butterfly — doesn’t usually come to town until April, but when the froth of black and orange insects arrive, they will sense that much of the milkweed plant they depend upon for laying their eggs (a nursery of sorts) has been killed by the cold, Finch said.

He has seen some sabal palms around the South Texas Medical Center that already look stressed.

“Almost every one of them looked like the tops were burnt,” Finch said. “That will be shocking if we lose them.” 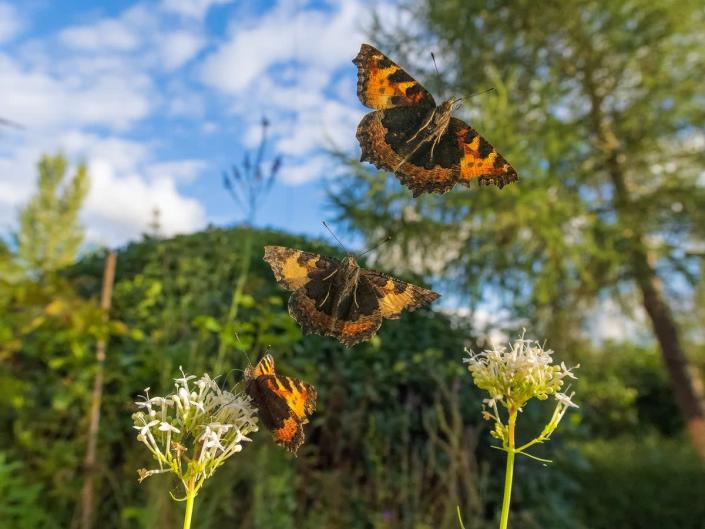